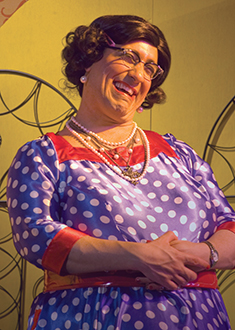 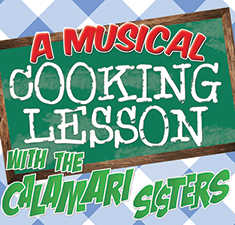 DELPHINE CALAMARI was born in Bay Ridge, NY, the eldest daughter of Rocco and Vittoria Calamari. By age seven, she was assisting her grandmother cater every major event at the legendary Rigatoni Lodge of the Brooklyn Federation of Italian-American Societies.

Her love for meat began soon there after, and within a few years she was known throughout the borough as “that Italian girl that can tell you which butcher a sausage comes from with her eyes closed.” By the time Delphine was a young woman, it was widely believed that unless you served Delphine’s meatballs at your wedding reception, your marriage would be doomed and you would never conceive a son to carry on your family name.
In addition to cooking, Delphine has always been interested in the arts, singing countless duets with her sister, Carmela, at St. Lawrence of the Roasted Martyrs Church and Convent. Their nativity of cold meats and dairy was always a huge crowd pleaser at Christmastime.

Also, as a young girl, Delphine attended Miss FloFlo’s School of Dance for Bigger Girls, where she excelled until she was asked to leave due to an unfortunate fight with a fellow dancer, Tula Mercantelli, over a piece of Easter pie. Today, Tula is carrying her third illegitimate child by a third father, and it serves her right.

Undaunted, Delphine was Founder and President of the Pasta and Meat Club at St. Lady of the Divine Pain High School, as well as unofficial Cookie Maker for the Drama Club, where she also landed such roles as Nurse Flinn in “One Flew Over The Cuckoo’s Nest,” the Kit Kat Club Janitor in “Cabaret,” and Rusty Charlie in “Guys And Dolls.” Upon graduating, she was fired from several restaurant jobs for forcing patrons to eat after they were full.

Jobless, she teamed up with her sister, Carmela, and founded the borough-famous Calamari Sisters’ Catering Company. They soon became well-known for their song-and-dance-and-cooking routines, being hired by such notable public figures as Ed Koch, Hoda Kotb, and Nancy Harrigan.

Knowing that the next natural step for them was television, when the opportunity presented itself, they grabbed it. Four years ago, their Uncle JoJo accidentally went swimming without taking off his cement block, and left them a large inheritance, which they used to finance their public access cable TV show, MANGIA ITALIANO.

Delphine wishes to thank her family for all of their support (except her Aunt Viola, go to hell), especially Uncle Geno for being in the right place at the right time when this kitchen set fell off the back of that truck! Delphine sends much love to all of her fans, and invites them to mangia, MANGIA!