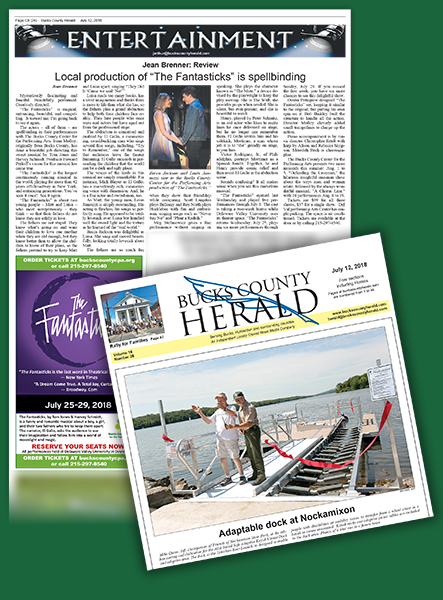 “The Fantasticks” is magical, entrancing, beautiful, and compelling. It wowed me. I’m going back to see it again.

The actors – all of them – are spellbinding in their performances with The Bucks County Center for the Performing Arts. Irene Molloy,originally from Bucks County, has done a beautiful job directing this sweet musical by Tom Jones and Harvey Schmidt. Producer Howard Perloff’s vision for this musical has come true.

“The Fantasticks” is the longest continuously running musical in the world, playing for more than 42 years off-Broadway in New York, and entrancing generations. You’ve seen it once? See it again.

“The Fantasticks” is about two young people – Matt and Luisa – who meet surreptitiously – they think – so that their fathers do not know they are wildly in love.

The fathers are not stupid. They know what’s going on and want their children to love one another when they are old enough, but they know better than to allow the children to know of their plans, so the fathers pretend to try to keep Matt and Luisa apart, singing “They Did It ‘Cause we said ‘No!’”

Luisa reads too many books, has a vivid imagination and thinks there is more to life than what she has, so the fathers plan a grand abduction to help both their children face reality. They hire people who once were real actors but have aged out from the professional stage.

The abduction is conceived and enabled by El Gallo, a mesmerizing, swashbuckling man who sings several fine songs, including “Try to Remember,” one of the songs that audiences leave the theater humming. El Gallo succeeds in persuading the children that the world can be a dark and ugly place.

The voices of the leads in this musical are simply remarkable. For instance, Mick Bleyer as El Gallo, has a marvelously rich, mesmerizing voice with dimension. And, he is a fine actor and swordsman, too.

As Matt, the young man, Louis Jannuzzi is simply outstanding. His acting is flawless, his singing so perfectly sung. He appeared to be totally lovesick over Luisa but handled well the sword fight and torture as he learned of the “real world.”

Becca Jackson was delightful as Luisa. She sang and moved beautifully, looking totally lovesick about Matt.

The fathers are so much fun when they show their friendship while conspiring. Scott Langdon plays Bellomy and Roy North plays Hucklebee with fun and enthusiasm, singing songs such as “Never Say No” and “Plant a Radish.”

Meg Stefanowicz gives a fine performance without singing or speaking. She plays the character known as “The Mute,” a device devised by the playwright to keep the play moving. She is The Wall; she provides props when needed. She is silent, but ever-present, and she is beautiful to watch.

Henry, played by Peter Schmitz, is an old actor who likes to recite lines he once delivered on stage, but he no longer can remember them. El Gallo invites him and his sidekick, Mortimer, a man whose job it is to “die” grandly on stage, to join him.

Victor Rodriguez, Jr., of Philadelphia, portrays Mortimer as a Spanish bandit. Together, he and Henry provide comic relief and then assist El Gallo in the abduction scene.

Sounds confusing? It all makes sense when you see this marvelous musical.

Dustin Pettegrew designed “The Fantasticks” set, keeping it similar to the original, but putting his own spin on it. Bob Binkley built the structure to handle all the action. Director Molloy cleverly added small trampolines to charge up the action.

Piano accompaniment is by music director Christopher Ertelt with harp by Alison and Rebecca Simpson. Meredith Beck is choreographer.

The Bucks County Center for the Performing Arts presents two more musicals this summer: Aug. 1 to 5, “Defending the Caveman,” the hilarious insightful one-man show about the ways men and women relate, followed by the always wonderful musical, “A Chorus Line,” with 10 performances Aug. 8 to 19.

Tickets are $99 for all three shows, $37 for a single show. Del Val performing Arts Center has ample parking. The space is air conditioned. Tickets are available at the door or by calling 215-297-8540.